Rody turns 72, wakes up to surprise in Davao

DAVAO CITY, Philippines – As he turned 72 yesterday, President Duterte woke up to a pleasant surprise.

Seven of his grandchildren – including the newborn Marko Digong, nicknamed Stonefish, youngest son of presidential daughter and Mayor Sara Duterte-Carpio – literally stormed his bedroom and woke him up at around 2 p.m. to greet him a happy birthday.

The President was still in his black shorts and white shirt when the children woke him up and sang “Happy birthday” while taking turns kissing him.

They left his house at Doña Luisa Village Phase 1 after hanging out with him for about an hour and a half.

There was no special party for his birthday. A private dinner with the family was scheduled later in the night.

She also posted a photo of her carrying Stonefish beside her father during the baby’s baptism last March 16.

Presidential son and vice mayor Paolo, on the other hand, vowed to support his father as he carries out his task as President of the country.

But youngest son Sebastian refused to give any message for his father on his birthday as he would not want his old man to rant again in public against him.

Special Assistant to the President Christopher Go wished Duterte the best of health so he could continue serving the country “until kingdom come.”

Ordinary folks were also seen outside his residence, bringing bananas and native chickens as gifts.

Last Monday, the President received not only one but two birthday gifts from Chinese Ambassador Zhao Jianhua during his visit at the Presidential Guest House in Panacan, Davao City.

Official photos released by Malacañang showed Zhao giving Duterte a painting of a rooster, symbolizing the President’s animal sign in the Chinese zodiac. Duterte was born on March 28, 1945, year of the Rooster.

The President was also delighted with another painting of him, his partner Honeylet Avanceña and their daughter Veronica, nicknamed Kitty.

Senators wished Duterte long life and strength to succeed in implementing his vision for the country until the end of his term.

“May the good Lord keep him away from harm, and the entire nation too,” Pimentel said in a text message.

Sen. Francis Escudero hopes Duterte would have more time for himself and for his loved ones, “and not to be judged so quickly and to be understood more, especially by the international community.”

“In a world that is used to diplomacy and guarded and calculated language, it is easy to be judged and crucified sometimes simply because one does not conform to accepted norms,” Escudero said. “However, that does not necessarily and automatically mean that one is bad or wrong.”

He added that Duterte’s “candidness, frankness and saying things as he sees it” probably helped him a lot in the last elections as the people want to be told what and how things really are “sans flowery or shrouded words and pleasantries.”

Sen. Panfilo Lacson wished Duterte well as he hopes that the President change the way he deals with the media, lawmakers, local officials and the general public.

“My wish is for him to start becoming statesmanlike. This is what he said when he was campaigning, that in due time, he will metamorphose into a statesman. That’s not yet happening. There’s still five years into his term,” Lacson said.

Chief presidential legal counsel Salvador Panelo prayed for health, saying: “I join the millions who gave you the spectacular mandate in their prayers and implorations to the God Almighty that He shower you with the blessings of good health.”

Panelo also asked the Lord “to send you His angels in heaven to spread their wings over you to protect you from harm and injury that you may accomplish your goal in eradicating the ills that plague the country and creating the foundations to propel this country in economic growth and progress.” – Edith Regalado, Christina Mendez, Paolo Romero 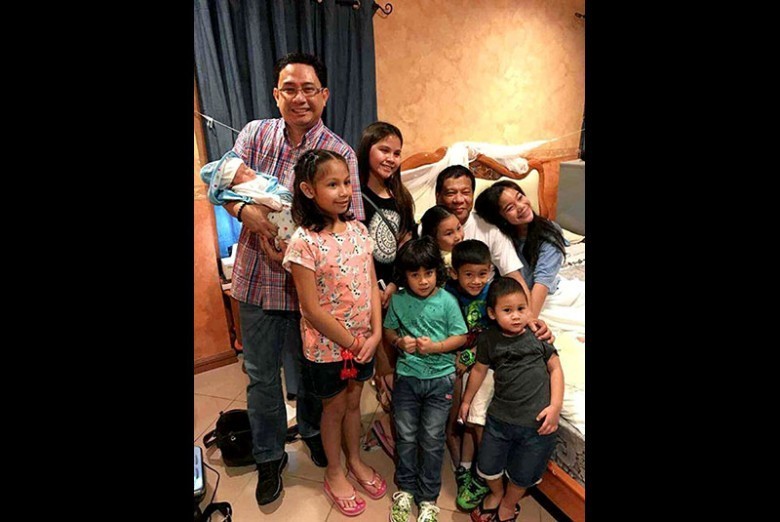