Duterte-Carpio has ordered the closure of the popular night market as they have become “undisciplined.”

“I have ordered the closure of the night market because of a number of violations and complaints,” she said on Wednesday morning.

Over 700 vendors who sell various goods including food, ukay-ukay, accessories as well as the masseurs who operate in the area will be affected by the closure order of the mayor.

Rhodelio Poliquit who leads the City Traffic and Transport Management Office (Cttmo) said in an interview on Wednesday that they will send out leaflets to the vendors to inform them.

Poliquit suggested for the closure order to the mayor due to concerns on cleanliness and orderliness in the area.

The mayor cited some of the issues and concerns that the vendors are violating.

She said they refuse to follow the one-family-one-stall rule; they insist on their preferred locations; presence of stalls that are run by financiers but managed by dummies; vendors sub-leasing stalls to others; and the vendors who claim they were able to buy or secure rights or permits over their preferred stalls, insisting on selling their products even if they are not included in the official list of allowed sellers.

Duterte-Carpio acknowledges that the street market has been contributing huge portions to the taxes the city collects.

In 2015, the city earned P5.47 million in taxes, which is over a hundred percent increase from the P2.24 million in 2014. From January to July this year, the city has already earned around P2.98 million.

However, the mayor said she will not reopen the night market unless the vendors follow the rules.

"The vendors must follow our rules. It is not the other way around. If they cannot follow the rules, I will never reopen the night market," she warned. 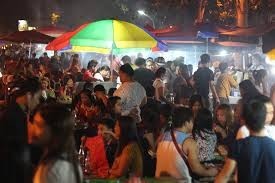